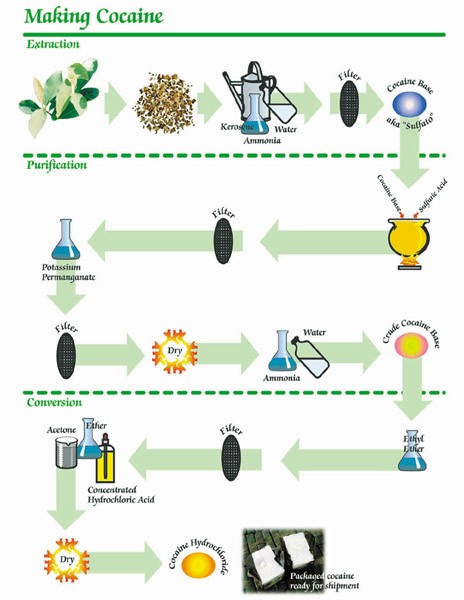 To some people, “cocaine can easily be extracted from coca leaves”, to others, "coca leaves contain no cocaine". The extreme positions in this discussion have an even longer and more ideologically charged genealogy than those in the coca and nutrition debate.

Drug control bureaucracies constantly cite the “easy extraction” of cocaine as a reason to continue keeping coca leaves under the strictest schedules of control, while defenders of coca use formulas such as “coca is not cocaine”, or “coca is to cocaine what the grape is to wine”. The analogy with wine is particularly inappropriate, since the fermentation of alcohol from naturally occurring plant sugars provides no parallel whatsoever to the extraction of naturally occurring alkaloids from an organic plant source.

On the one hand there is the traditional Western view, enshrined in the 1961 UN Single Convention, which strictly equates coca with cocaine, and treats both in exactly the same way. In contrast, there is a school of thought, which has always stressed the differences between coca and cocaine, and has often – misguidedly, perhaps – sought to identify the crucial distinction in a contrast between an alkaloid and the more complex chemical composition of the leaf.

This has led to the extreme position of denying that coca contains any cocaine at all, and seriously undermined attempts to understand the real differences between these two substances: one a single alkaloid with a clear molecular structure, and the other a plant with a complex and still poorly-understood array of mineral nutrients, essential oils, and varied compounds with greater or lesser pharmacological effects, one of which happens to be the alkaloid cocaine.

In public discussion of these different forms of the drug, it has not often been recognized that the clearly demonstrable, slow assimilation of cocaine through coca chewing actually provides a stronger argument in defence of traditional custom than the scientifically untenable idea that coca contains, or releases into the human organism, absolutely no cocaine at all.

Back to Coca Myths Summary