Report of the Commission of Enquiry on the Coca Leaf 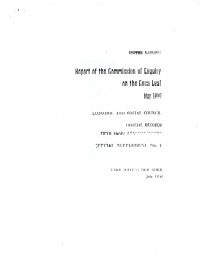 In 1961 the coca leaf was listed on Schedule I of the UN Single Convention on Narcotic Drugs together with cocaine and heroin. The inclusion of coca has caused much harm to the Andean region and a historical correction is long overdue, for the sake of further conflict prevention and out of respect for the Andean culture. The rationale for including the coca leaf in the 1961 Single Convention is mainly rooted in the Report of the Commission of Inquiry on the Coca Leaf from May 1950 The report was requested of the United Nations by the permanent representative of Peru that was prepared by a commission that visited Bolivia and Peru briefly in 1949.

Conclusions and Recommendations only