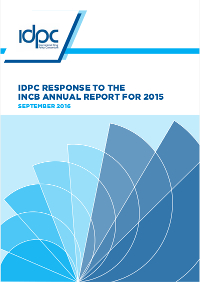 The Annual Report of the International Narcotics Control Board (INCB or Board) for 2015 is, like the broader international drug policy debate, coloured by what was then the approaching United Nations General Assembly Special Session (UNGASS) on the world drug problem of April 2016. A number of key themes are reflected in the Report, including the abolition of the death penalty for drug-related offences; the defence of the international drug control conventions, and the availability of controlled drugs for medical and scientific uses. This might be summarised in what the President terms in his Foreword ‘the right way in drug policy’.

As is increasingly the case, the Report is highly informative as regards the contemporary drug landscape. In addition, this is complemented by a reduction in explicit political content, a trend that has featured over recent years. Prior to this trend, the Annual Reports tended to be filled with examples of the Board exceeding its mandate. Shortcomings do continue, with the Board often failing to comment or recommend with respect to issues on which it should, and which sit squarely within its mandate. One of the most blatant instances is the neglect of criticism of Russia’s failure to provide opioid substitution therapy (OST). Furthermore, while there is much to be welcomed in the Board’s support for the principles of human rights, it is often expressed in vague language. There is a reluctance to speak out regarding human rights violations, though the explicit critique in August 2016 of the ‘war on drugs’ in the Philippines represents a promising exception.