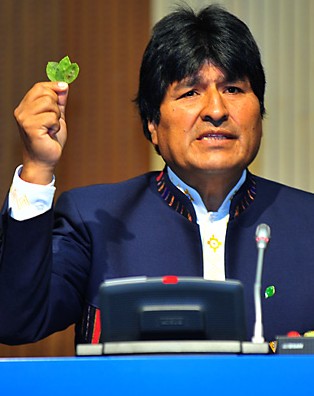 In 2009, the President of Bolivia, Evo Morales Ayma, sent a letter to the General Secretary of the United Nations, Ban Ki Moon, in which the Government of Bolivia proposed to amend article 49 paragraphs 1 c) and 2 e) of the Single Convention on Narcotic Drugs of 1961. From Bolivia´s point of view, the international community holds in its hands a historic opportunity to correct a misconception regarding coca leaf chewing by eliminating  both paragraphs of the Single Convention.

This action will give back the dignity and lawful right to the people that consume coca leaf for traditional and medicinal purposes to legally exercise this cultural and harmless practice. Therefore, a positive agreement on Bolivia´s proposed amendment will benefit the Single Convention given that a norm that is selfcorrecting grows stronger with application.

Both paragraphs state that “coca leaf chewing must be abolished within twenty–five years from the coming into force of this Convention as provided in paragraph 1 of article 41”; and that a Party to the Single Convention may reserve the right to temporarily permit coca leaf chewing in any one of its territories, whilst being subject to the restriction established in paragraph 2 e), that is to say, the practice will be tolerated for a period of no more than 25 years.